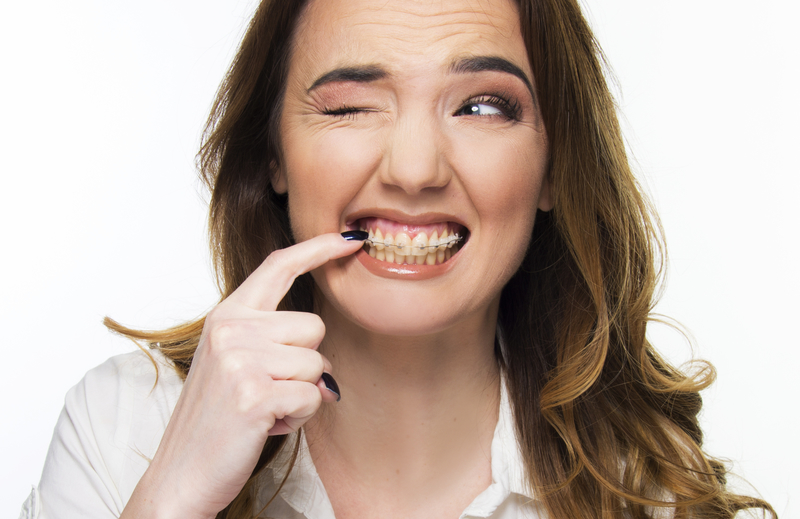 As you begin orthodontic treatment, changes will occur in your mouth that could be uncomfortable or unexpected. Braces help patients get the beautiful and straight smiles that they deserve, but orthodontic treatment is not an easy process. As your teeth begin to shift, you can experience some tooth tenderness, lip sores, or pokey wires. These are all normal occurrences, but some patients can feel uneasy. Regular orthodontic visits can remedy these situations and help you feel back to normal in no time. Find out what to expect with braces and how you can treat these issues!

Problems That Braces Can Cause

As you begin orthodontic care, there are some problems to look out for that are commonly associated with braces. Although most of these issues are not serious, it is still good to know what to expect whenever you begin care. Once braces are placed, the process of fixing your malocclusion begins and your teeth will start to shift into their correct positions. As this occurs, soreness and swollen gums are both very common reactions to braces. Swollen gums can also influence tooth tenderness, which normally lasts between 2-4 days after braces are first placed. Dull aches can also accompany tooth tenderness but can be relieved by eating soft foods and an over-the-counter pain medication, if needed. Other common problems with braces include lip and cheek sores, pokey wires, and loose bands and/or brackets. Lip and cheek sores develop as the brackets rub against your mouth but can be remedied by placing a small piece of wax on the part of the braces that’s causing the irritation. Pokey wires can be caused by sticky foods or when a patient picks at their braces, and wax can also be used to cover the pokey piece or you can try pushing the wire back into place with a Q-tip or pencil eraser. Loose or broken bands and brackets normally aren’t considered an emergency and can be covered in wax until the next orthodontic appointment. If the broken bracket holds a rubber band in place or if a bracket on one of the upper or lower front teeth breaks, you will need an appointment as soon as possible to fix the bracket.

Serious problems that can be caused by braces include demineralization and gingivitis. Demineralization creates white scars that look like tiny white boxes and outline the area where the bracket used to be. These white scars are caused as food left on teeth come in contact with bacteria and create acid. The acid destroys calcium and phosphate in the teeth, which causes decalcification or white scars. Braces do not cause demineralization, but bad hygiene during treatment usually leads to white scars. Unfortunately, white scars normally don’t disappear after braces are removed and can even lead to cavities. Gingivitis, on the other hand, occurs as the gum tissues become inflamed and is one of the first steps to gum disease. Redness, swelling, tenderness and bleeding can result from gingivitis, but can be entirely prevented by brushing rigorously around the brackets and flossing regularly. 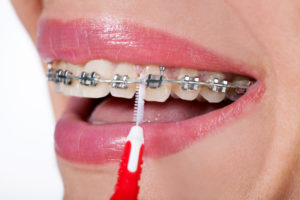 Many problems that come with braces can be avoided or lessened by sticking to a strict oral hygiene regimen. To properly maintain your braces, make sure to brush after every meal, use threadable floss or a floss threader and use a proxabrush. Even though it may seem excessive to brush after each meal, this practice can get rid of remaining food that may be stuck in your braces and prevent plaque and acid from building up (which helps prevent demineralization and gingivitis). Floss threaders are placed between the teeth and under the wire to aid in flossing. Threaders help you floss between each tooth, which can be difficult to do with braces in the way. A proxabrush is typically referred to as a “Christmas tree brush” and helps clean between each bracket. By placing the proxabrush under the archwire and between each bracket, you can thoroughly clean the bracket and remove any stuck food particles.

Maintaining a good diet, especially during orthodontic care, should be another important part of your oral health routine. Sticky or hard foods, such as nuts, popcorn, gum, caramel and chips, can damage your orthodontic appliance and hurt your teeth. Although the temptation may be great to cheat and eat one of these items, the consequence of doing so can be costly and painful. Eating these foods also gives you a higher risk of developing cavities during your time with braces, which can be difficult to treat. Make a list of the foods you should and should not eat, and stick to your oral health goals to keep your teeth and braces healthy.

If you or a member of your family is in need of orthodontic care, call Belmar Orthodontics at (303) 225-9016! Our dedicated staff is ready to help you achieve your oral health goals and get a beautiful, straight smile. Call now to find out what options we have for braces and how soon you can begin treatment! 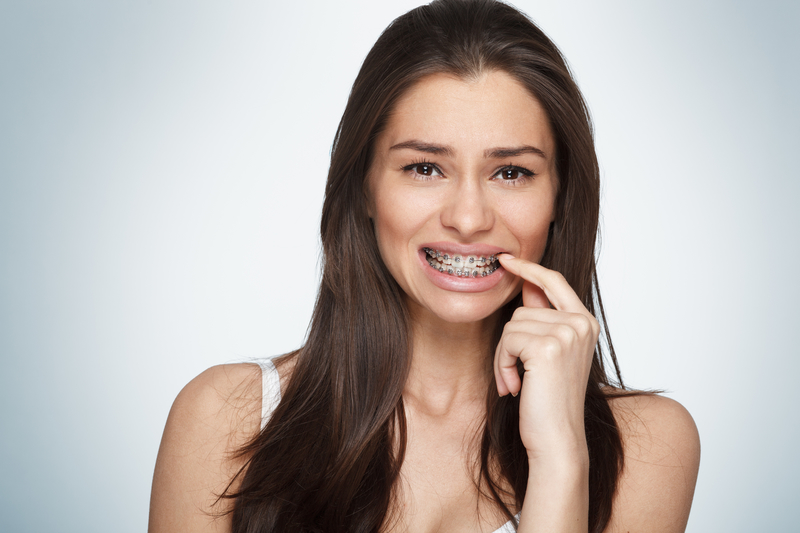 Braces are incredible devices that can help transform your teeth and reshape your jaws. However, they are not always fool-proof. Every so often, a patient will have a dental emergency. That may be a bad cavity that needs to be fixed, or a bracket or wire will break. There are only a few dental emergencies that can happen with braces. We can help you to know what to do when each of those emergencies happen!

Orthodontic treatments have been around for a long time-even as far back as the ancient Egyptians! Although their ways were archaic, people for centuries have been trying to fix crooked teeth and develop a prettier smile through orthodontic work. The ancient Greeks, Romans, and Etruscans were known to have practiced orthodontia, and interestingly, the Etruscans used to attach gold bands to women’s teeth to preserve the position of their teeth after death. Orthodontics saw a surge in progress during the 18th century thanks to Pierre Fauchard. Known as the “Father of Dentistry,” he invented an appliance called a bandeau, which was a horseshoe-shaped piece of metal with regularly spaced holes that fit around the teeth to correct the alignment. He would also use forceps to physically realign teeth into their correct positions and tie them to neighboring teeth until they healed.

Orthodontics in the United States exploded during the 19th century. J.S. Gunnell created a type of headgear that fashioned to the head and exerted a soft pull on teeth while Charles Goodyear invented vulcanized rubber which would eventually become one of the most commonly used appliances in orthodontics. But Edward Hartley Angle, the “Father of Modern Orthodontics,” took orthodontics to another level by identifying the true properties of malocclusion, or misalignment, and addressed them with his own set of orthodontic appliances in 1880. Until the 1970s, orthodontist would attach anchored brackets around each tooth with winding wires, but with the invention of dental adhesives, orthodontists could then stick the brackets to teeth surfaces. Stainless steel then replaced gold and silver as the most popular option for wires, due to its manipulability, and became the most cost-efficient option for braces.

Dental Emergencies and What To Do About Them

Braces have come a long way since their beginnings many centuries ago, but as braces have evolved, so have the problems that come with them. Although dental emergencies are few and far between when it comes to braces, there are some common issues that can be readily addressed and fixed if serious enough. The least serious issues that you can have with your braces is tooth tenderness and lip and cheek sores. As your teeth become accustomed to your braces, your teeth will most likely be sore for 2-4 days. Using headgear, rubber bands, and springs can add to this soreness, but that discomfort normally goes away in the same amount of time. Eating soft foods and taking an over the counter pain reliever can help dull the ache. Loose or broke bands and brackets are also another annoyance that sometimes occur with braces. Although not considered an emergency, they normally break due to patient’s eating prohibited foods or picking at their braces. Whenever this occurs, place a piece of wax on the spot of irritation and wait until your next orthodontic appointment, unless the broken bracket breaks on one of the upper or lower front four teeth, then call your orthodontist as soon as possible.

Protruding wires are not only bothersome, but can stab the inside of your lips and mouth if not fixed. Wires can come loose from eating sticky foods, like candy, or by picking at your braces. If this has occurred, try using a Q-tip or pencil eraser to push the wire in towards the teeth. To avoid accidental damage to the wire, make sure to not bite your nails or pens and pencils. In rare occasions, a piece of the appliance may break and be swallowed by the patient. Although alarming, keep calm and have someone look in your mouth to see if the appliance if visible. If confident that you can remove it, you may carefully attempt to do so. If you are unable to see the piece, are coughing excessively, or having difficulty breathing, that could be a sign that the piece could have been aspirated and you should contact your orthodontist immediately.

How To Protect Your Braces 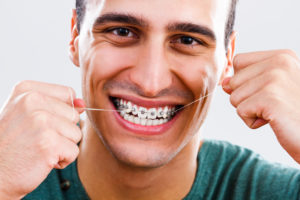 Unless under extenuating circumstances, most dental emergencies are avoidable. Maintaining good oral health and hygiene throughout your time with braces is vital in ensuring healthy teeth and gums, and preventing cavities. Food particles are easier to get stuck between braces, and when not cleaned thoroughly, can lead to other dental emergencies, like tooth decay, which can cause major complications. Hard foods, sticky foods, and foods high in sugar should be avoided as they are known to break brackets and cause cavities, which you more susceptible of developing while wearing braces. Some of the need-to-avoid foods include hard candy, nuts, apples, popcorn, ice, gum, caramel, and licorice.

Because braces are so notorious for getting food stuck in them, make sure that you are brushing after every meal to prevent staining and reducing bacteria buildup in your mouth. Use a soft brush, and brush each tooth by starting at the top and brushing down, then repeating the motion and brushing up around each bracket. Use threadable floss of a floss threader to get the hard to reach areas in between teeth that are covered by the archwire. Using the pointed end, insert between the teeth and gently move the floss back and forth between the two teeth. For added care, use a proxabrush, sometimes called a “Christmas tree brush,” to scrub between each bracket in an up and down motion to get any extra gunk that might be stuck there. For any dental emergencies that you might be having, make sure to contact Belmar Orthodontics at  (303) 225-9016 for your next consultation!